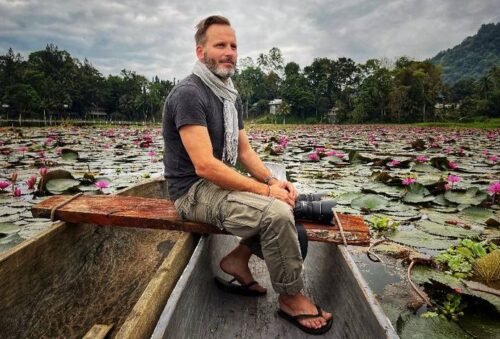 Bangkok, Thailand, October 20, 2022 / TRAVELINDEX / The Pacific Asia Travel Association (PATA) is pleased to announce the appointment of multi-award-winning photographer Scott A. Woodward as its Ambassador for Visual Storytelling through Photography.

“Scott Woodward’s photography work is both engaging and inspiring,” said PATA CEO Liz Ortiguera. “Beyond his stunning images, which have appeared in National Geographic Magazine, Condé Nast Traveller and Travel + Leisure among many other international titles, his photographs also have the ability to deliver unique insights, given his innate respect and admiration for indigenous peoples, culture and heritage. They go beyond being just being pretty social media images by providing windows into the local culture, heritage and peoples. He’s also used his lens to shed light on solutions to global concerns including hospitality education for poverty alleviation and children’s cancer in developing nations.”
Picture: L/R:

Sala Bai Hotel & Restaurant School is a tuition-free hospitality training institution in Siem Reap, Cambodia. Aimed at helping Cambodia’s most disadvantaged youth, Sala Bai’s vocational training is the fastest and most efficient way of fighting poverty, human trafficking, and teenage prostitution. Providing students with the skills and experience necessary to secure gainful employment in one of the city’s numerous hotels, guesthouses or restaurants, Sala Bai helps empower these young people, resulting economic independence and increasing the students’ — and their families’ — quality of life. This is a portrait of Soksara, one of Sala Bai’s nearly 2,000 graduates, at the Siem Reap luxury hotel where she was employed.

Deep inside the Indonesian rainforest of central Sumatra lives the Tesso Nilo Elephant Flying Squad. This group of domesticated elephants and their specially trained mahouts are operated by the World Wildlife Fund (WWF) in collaboration with Indonesia’s Ministry of Forestry. The squad’s mission is to provide a secure haven for Riau Province’s largest remaining wild elephant population. Elephant numbers have declined in Riau from more than 1,600 in 1985 to as few as 350 today, about 150 of which live in Tesso Nilo National Park. By patrolling the fringes of the park, the squad helps prevent wild elephants from invading farms and villages – where they can cause immense damage and run the risk of being injured or killed by angry farmers and villagers – by carefully driving them back into the jungle. The Elephant Flying Squad is in constant battle to bring harmony to the local environment by mitigating human-elephant conflict.

A man who is in tune with his humanity, Mr Woodward has contributed his talent towards numerous philanthropic and anthro-cultural projects. These include documentaries for Sala Bai, a charity hospitality training institution in Cambodia that educates the poorest segment of society; for the benefit of children with cancer in developing nations (How I Live); as well as a reportage on the World Wide Fund for Nature’s (WWF’s) Elephant Flying Squad in the Tesso Nilo National Park in central Sumatra, focusing on wildlife and habitat protection. The PATA Foundation has ongoingly been a supporter of the Sala Bai school in Cambodia over the past ten years.

Parents of patients at Yangon Children’s Hospital (YCH) in Yangon, Myanmar crowd around the nurse’s station where the caregivers prepare, label, and register the blood samples before sending them for testing. YCH is the main paediatric oncology facility in Myanmar. For a country with a population of 53 million – 25% of which are under 25 years old – this unit operates at greater than 100% capacity. The photographs in this series are part of a larger documentary project titled ‘How I Live with Cancer’ created in close partnership with the Dana Farber/Boston Children’s Cancer Center and Persistent Productions, which aims to chronicle the patients being treated within the paediatric oncology units in healthcare systems within LMIC (Lower Middle Income Countries) and how they are working to close the survival gap versus HICs (High Income Countries).

A master artisan dedicated to the preservation of the weaving tradition of the T’boli culture, Yab Man is a dreamweaver who learned the craft from her mother. The first T’nalak design she made was the Bagu K’lung and the weaving legacy lives on through her, as she has in turn has passed the knowledge on to her daughter, Elena. The golden morning light dancing off the threads feels symbolic of the promise and magic of what is to yet be created.

“According to our newly released edition of PATA’s Issues & Trends, one of the key drivers of positivity in online social sentiment about Asia Pacific travel is impactful photography. Certainly, people have been taking photos on their travels for as long as we can remember. But increasingly, travellers are yearning for meaningful experiences abroad and are keen to capture these on camera to mark their journey of seeing and learning about the world and about themselves. And Scott Woodward is just the person to inspire them and show them how they can achieve this,” she added.

Commenting on the appointment, Mr Woodward said, “I am honoured and thrilled to be PATA’s Ambassador for Visual Storytelling through Photography. It was my father who introduced me to photography when I was a young boy. He taught me how to operate a manual camera, as well as how to compose an image and use light effectively. More importantly, he instilled in me a sense of curiosity and adventure, and these are the very traits that truly make me a photographer. I am excited to share what else I have learnt to help travellers capture compelling imagery that tells stories and speaks about their personal journeys.”

Originally from Canada, Scott Woodward is now based in the Philippines. He has spent the last 25 years living, exploring and telling stories across Asia. He regularly produces editorial features for publications around the world, and has photographed advertising campaigns for numerous global brands.

Mr. Woodward has received many accolades for his work, including being named “One of Asia’s Finest Photographers” by Nikon. He has also been twice honoured by inclusion in the Luerzer’s Archive of “200 Best Advertising Photographers Worldwide”. He’s a both a Nikon Professional Photographer and a frequent Apple collaborator and iPhone content creator and during the COVID-19 pandemic hosted one of Apple’s first internationally-broadcast virtual iPhone photography workshops.

Mr Woodward will be sharing his expertise and experience at the Association’s upcoming Asia Pacific forum for travel, the PATA Annual Summit 2022 in Ras Al Khaimah, UAE (located just outside Dubai) from October 26-27.

About PATA
Founded in 1951, the Pacific Asia Travel Association (PATA) is a not-for-profit membership association that acts as a catalyst for the responsible development of travel and tourism to, from and within the Asia Pacific region. The Association provides aligned advocacy, insightful research and innovative events to its member organisations, which includes government, state and city tourism bodies; international airlines and airports; hospitality organisations, and educational institutions, as well as thousands of young tourism professional (YTP) members across the world. The PATA network also embraces the grassroots activism of the PATA Chapters and Student Chapters, who organise numerous travel industry training programmes and business development events across the world. Thousands of travel professionals belong to the 32 local PATA Chapters worldwide, while hundreds of students are members of the 28 PATA Student Chapters globally. The PATAmPOWER platform delivers unrivalled data, forecasts and insights from the PATA Strategic Intelligence Centre to members’ desktops and mobile devices anywhere in the world. PATA’s Head Office has been in Bangkok since 1998. The Association also has official offices or representation in Beijing and London.

WTTC on Opening of Air Corridors to Island Holiday Hotspots